Developmental Services has a framework towards stability

Publication Date:
Monday, December 22, 2014 - 12:00pm
(Toronto) – Recommendations agreed to by unions and employers in Ontario’s developmental services sector were endorsed over the weekend by the Ministry of Community and Social Services. It’s the first step toward creating desperately-needed stability for workers and the people they support, said the Ontario Public Service Employees Union (OPSEU). 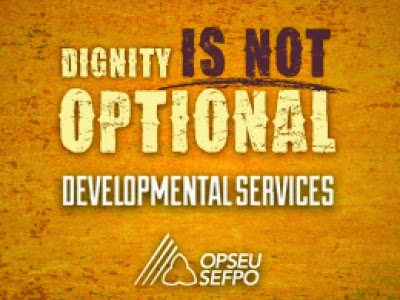 “We are happy to announce a provincial framework for local negotiations,” said OPSEU Developmental Services Chair Patti Markland. “The local unions will go to their own bargaining tables to build on what we’ve accomplished so far together.”

OPSEU has lobbied the Ontario Government for increased funding to agencies to end the crisis in the sector. The government had allocated $180 million to improve wages for frontline workers who support people with intellectual disabilities and their families. Employers confirmed in their own province-wide survey that they can’t attract and retain skilled and professional staff with such poor hours and earnings. Lower staff turnover means better continuity of service.
The agreement means the Ministry of Community and Social Services (MCSS) can soon begin the rollout of that $180 million. All frontline workers benefit from the general wage increases. A fifth of the $180 million is earmarked to further help the lowest-paid workers. If agency employers and local unions have no agreement on wages by June 1, 2015, MCSS will roll out flat rate increases.
“We have more than 50 locals in bargaining, and they will hold employers to that agreement for wage increases. The Ministry will transfer the money to agencies for wages, not for other agency expenses,” said OPSEU President Warren (Smokey) Thomas. “Other local issues will be resolved independent of those wage improvements. Long-term and structural problems, including health and safety in the sector will be dealt with by way of a Developmental Services Advisory Group’s recommendations to MCSS.”
DS workers are among the lowest-paid in Ontario. Two-thirds are part-time or casual, about double the rate in the overall working population. Some of them earn less than the targeted minimum wage of $14 an hour.  Several OPSEU locals voted with near unanimity to take strike action if necessary in their local contract negotiations. Their key issues include converting part-time hours to full-time jobs, same pay for same job, pensions, and WSIB.
OPSEU, which represents 12,000 developmental services workers, and the Canadian Union of Public Employees, took part in discussions with employers.
For information:
Patti Markland, Chair, OPSEU Developmental Services, 613.848.6016
Sheila Keenan: OPSEU Communications and Campaigns, 416.802.1251,skeenan@opseu.org
Posted by OPSEUdevservices at 13:10

OPSEUdevservices
Ontario, Canada
Welcome to our developmental services blog! We are members of OPSEU who are proud to work in Ontario’s Developmental Services agencies. We provide support for people with developmental disabilities in residential group homes, through day programs and family home programs. We enjoy the work we do in our communities, and believe that all of the people who depend on these services deserve respect and properly funded programs. Please read our stories, and share your own with us. Erin Rice, OPSEU Developmental Services Divisional Executive